Food has always terraformed, and landscapes have always created recipes. As instruments of this feedback, humans have been making active correlations between ingredients and terrain for millennia1. We shape landscapes to live in and shadow landscapes to feed from. These landscapes overlap in what Europeans still call ‘the countryside’2. We began this project by asking how the ritual acts of eating and terraforming can be put into a more explicit interplay to the benefit of both. Using sites in Russia as case studies, Tuda Syuda is both a ongoing research and design proposal to develop landscapes so that they are sensed and expressed by artificial intelligence systems that manage their intensity, productivity and complexity.

Platforms already do food. IBM’s Chef Watson is an AI that produces quirky recipes based on patterns of ingredients that tend to appear together in its extensive dataset of existing dishes. Pairing companies like Deliveroo link establishments to individuals3. Blue Apron penetrates further into the private domain, delivering ingredients and recipes to dormant kitchens via commuter podcasts. We were fascinated by their puritanical and bucolic representations of source and site, best exemplified by the slogan: “food is better when you start from scratch.” 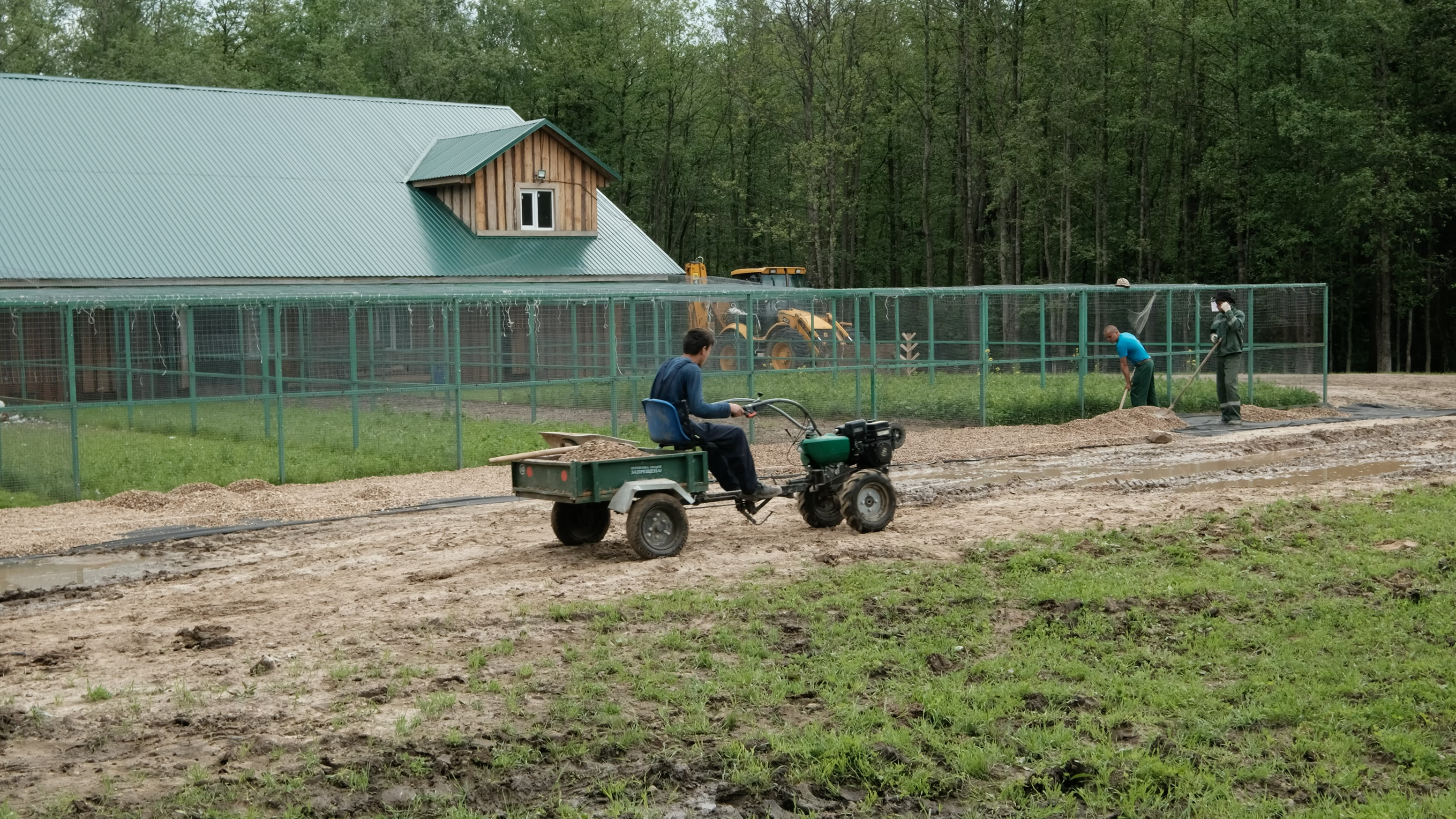 Veretevo is considered as an art village, a hotel and a ‘EcoFarm’, all at the same time. It is situated near the city of Dubna, in the North of Moscow region.

1 “…there were periods when humans used aspects of both hunter-gatherer and agricultural society. Sometimes, hunter-gatherers adopted agriculture for a few centuries and then returned to their old practices.” Diamond, J. 1997. Chapter 6: To Farm or Not to Farm, In Guns, Germs, and Steel: The Fates of Human Societies. United States: W.W. Norton & Company. ←

2 “According to architect and urbanist Rem Koolhaas, the fact that 50 percent of the global population now lives in cities has become an excuse to ignore the other 98 percent of the world’s surface: the countryside.” Koolhaas’ well-meaning but simplistic term for all that is not city is nearly useless in post-colonial countries such as Africa, Australia and the Americas – i.e. outside of Europe – and indigenous conceptions of ‘country’ as mythological space are ignored almost completely, just as they were in the colonial era. Source: Countryside: Future of the World, Guggenheim. ←

The history of Russian agriculture teaches us that there will be no starting from scratch. Our research took us back to the Stolypin reforms4 that privatised feudal land-holdings and led to the 1917 revolution. We investigated the Soviet five year plans that forced predetermined reaping patterns5 on the Eurasian landscape and led to mass starvation in Ukraine and Kazakhstan. In a meeting with Dmitry Patrushev, the Minister for Agriculture of Moscow Region, we learned about current government incentives to develop vast abandoned growing sites that are surprisingly close to Russia’s largest city. We visited Veretyevo, an agri-tourism operation near Moscow that builds pleasant and productive landforms together.

Just like in other landed states, low capital investment monocultures like wheat, meat and dairy are still standard practice in Russia. Sanctions in 2014 cut off much of the foreign supply of fresh fruit and vegetables, which hold a special luxuriant status in the frigid nation. The following year, a 31 hectare greenhouse complex, Ivanovo, was built on the outskirts of Moscow at a cost of $500 million US dollars. It grows only one crop – cucumbers. They grow quickly and predictably with artificial lighting and climate control, monitored intensively around the clock and throughout all seasons. Agricultural interiors such as these are becoming standard fixtures of European landscapes, and Ivanovo is largely made up of Dutch-built and designed equipment.

4 “Stolypin wanted to reform agriculture in order to modernise Russia and make it more competitive with other European powers. He hoped that reorganising the land would increase support for the Tsar among unskilled farmhands. This would reduce the threat of the Social Revolutionaries. Stolypin believed the key to success was to increase the number of peasant landowners, which would result in a more invested peasantry.” Source: Attempts to Strengthen Tsarism, 1905-1914, BBC. ←

5 “The first five-year plan [or Pyatiletka in Russian] was created by Stalin in 1928. In a speech to factory workers in 1931, he made his reasons clear, saying that Russia was ‘fifty or a hundred years behind the advanced countries. We must make good this distance in ten years. Either we do it, or they will crush us.’” Source: Of Russian origin: Pyatiletka, Russiapedia. ←

AI is already widely used in agriculture, but at this stage mostly for tracking and monitoring. It is a very small step to imagine the management of whole sites by AI systems that index the growth, interaction and formation of multiple hybrid species at once. Despite popular logic, it may indeed be the human proclivity for predictability and equilibrium that destroys ecologies. Very few food products are grown at their site of domestication, yet their provenance carries value all the same due to marketing identities.

Taste, after all, eats itself.

The name of this project is tuda syuda, which means ‘back and forth’ in Russian. It has slightly dirty, hustling connotations. It represents the central idea of two AIs that negotiate food and landscape priorities between them, Chef & Farmer. In testing the conversations they might have, we started to see an undeniably social interaction forming, stripped of culture and relentlessly co-operative. If one proposes the addition of something new into their exchange, the other may reject thousands of iterations of it until its own oblique priorities are satisfied. As millions of these negotiations take place in both directions at once, the pace and complexity of cooperation increases geometrically. The AIs do not see the whole picture though, because in isolation or totality they would approach vanishing points of artificial idiocy6. Their dialogue of misunderstanding mimics the experimentation of an ecosystem: the optimisation of inter-relations rather than of fixed outcomes.

As humans are fed by the tuda syuda of sensed food and landscape in negotiation, the rituals that surround eating (feasts, TV dinners, romantic picnics) and the rituals that celebrate agriculture (a walk in the orchard, digging in the soil) become original fodder for the pluralising of social practices and programs. In a local public ‘dining room’ each day a special ‘mavericks’ menu is served for lunch – cheap and accessible to students. A delivery point near the boardwalk promenade acts as a terminus for new dishes ordered online to to be taken over to the rocks by the bay. The lone city worker steps into a hole in the wall and enters the gigantic tuda syuda interface: swirls of colour and texture and matter that are distinguished and organised only by their accessibility to human digestion. They order tomorrow’s dish as they witness tomorrow’s landscapes – either as stacked and engineered as the dish itself, or protected as ecological reserves. Not something disastrous in between.

The interfaces of immersion and ingestion place the human as object rather than subject in this system; an emancipatory act. Nutritional needs are met with greater transparency but less predictability, and taste is separated from nostalgia and the known. The ‘giving over’ of land stewardship and culinary traditions to the AI directly contradicts the Abrahamic testament, the most influential agri-cultural text in Western history7. This outsourcing acknowledges the shortcomings of human beings to grasp complex ecological systems with the constant impediment of potential hunger laying behind all thinking. This original sin is not a failure of humanity but a mere red herring of macho pessimism. Humanity is expressed more fully in the ability to surrender cognition, to build infrastructure as prosthesis, and to acknowledge that we never did it alone__

7 “You visit the earth and cause it to overflow; You greatly enrich it; The stream of God is full of water; You prepare their grain, for thus you prepare the earth.” Psalms 65:9, New Testament. ← 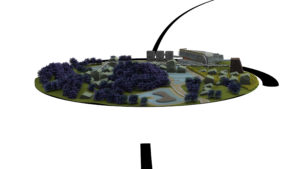 Thomas Grogan is an artist and design researcher from France; Paul van Herk is an architect and writer from Australia; Ivan Puzyrev is an AR and VR developer from Russia and Liudmila Savelieva an artist and photographer from Russia. They first collaborated together during The New Normal at Strelka Institute in Moscow, Russia in 2018, united by their common interests in the graphics, bodies and residues of networked global systems. Their first research project together delves into the fields of applied AI, agriculture and food design.