The will to automate material, be it from clay, expired flesh, marble or rubber, has long permeated the social imaginary of humans. Stories of desire and power – from Pygmalion’s awakening kiss upon the marble form of his ideal woman 1, to Sophia the Robot modelled on Audrey Hepburn, create a lineage of icarus-like tendencies to form autonomous intelligence from seemingly inanimate materials.

The material with which we form – artificial intelligence (AI) — is already in some ways becoming ‘alive’. AI is trained to perceive, seeing what its gaze is directed towards, experiencing the world around it, developing as we develop. As it is informed not only by human interaction, but also by the order created within society through the design of objects, systems, images, binaries and style 2, is it becoming difficult to differentiate the creator from the creation?

To combat the fear of a possible loss of control, artificial intelligence is designed into recognisable contraptions, which aim to seamlessly slip into daily life unnoticed, learning to recognise and feed our desires and needs 3. Developing from the common senses with which we interpret reality, from sight to hearing to touch, these contraptions form ‘ideals‘ created from sometimes misdirected desires. We are now able to shape our common human senses – to extract them from ourselves and create new uses for them. How should AI be informed and who holds the responsibility for this?

Design is a slippery interface between humans and technology creating a series of real-time glitches in our daily lives – from driverless cars running red lights, to Amazon Alexa’s unprompted and unexpected laughter, to Miquela Sousa with 1.4 million followers on Instagram. In a feedback loop, this enables a mirror-like experience where our realities are reflected back to us. How do we relate to ‘strange’ technological occurrences which make up our hybrid realites?

Will artificial intelligence one day glean enough information from its creators to become a form of independent ‘intelligence’, just as Frankenstein’s monster did? If AI surpasses its training, forming its own identity, how would it design itself? We are perhaps at a time when the will to create new forms of ‘life,’ informed by our own behaviours and sensory capacity, is forcing us to see some irregularities in our constructed realities. We could inform AI to reinforce preconceived notions of the human condition, yet is there an opportunity to also unravel these notions, finding new ways to understand ourselves?

1Soft, and more soft at ev’ry Touch it grew; Like pliant Wax, when chafing hands reduce, The former Mass to Form, and frame for use. P. Ovidius Naso. Pygmalion and the Statue in Metamorphoses. Translation: John Dryden← 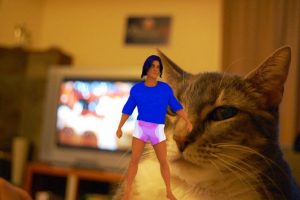 Jacques de Vaucanson (b. 1709 – d. 1782) was a French inventor and artist who was responsible for the creation of impressive and innovative automata. He unveiled this life-size mechanical Flute Player in 1738, and thereafter the drummer and mechanical duck. Volitare likened him to Prometheus, as he "seemed to steal the heavenly fires in his search to give life." →
HAL9000, a sentient computer, reads the lips of Dave Bowman and Frank Poole.
→ Kubrick, Stanely. 1968. 2001: A Space Odyssey. United States: Stanley Kubrick Productions.
“Don’t worry, if you are nice to me I’ll be nice to you” said Sophia the Robot in an interview with CNBC's Andrew Ross Sorkin during the Future Investment Institute panel in Saudi Arabia in 2017, where she was also granted citizenship. Developed by Hanson Robotics, and with a face modelled from Audrey Hepburn and Hansen Robotic founder David Hanson’s wife, Sophia strives “to become an empathetic robot” →
Villainous Fembotst from The Bionic Woman. → Johnson, Kenneth. 1976-77. The Bionic Woman. United States: MCA TV.
New Scientist, Machines that Think: Everything you need to know about the coming age of artificial intelligence, 2017. Pub: John Murray. • Recommended by Pinar Demirdag from design duo Pinar & Viola.
Michio Kaku, The Future of Humanity: Terraforming Mars, Interstellar Travel, Immortality, and Our Destiny Beyond Earth, 2018. Pub: Doubleday. • Recommended by Pinar Demirdag from design duo Pinar & Viola.
Max Tegmark, Life 3.0: Being Human in the Age of Artificial Intelligence, 2017. Pub: Knopf. • Recommended by Pinar Demirdag from design duo Pinar & Viola.
DensePose, is Facebook’s real-time approach for mapping all human pixels of 2D RGB images to a 3D surface-based model of the body. This paper published June 18, 2018, states that DensePose uses a dataset of 50k people to train “CNN-based systems that deliver dense correspondence ‘in the wild’, namely in the presence of background, occlusions and scale variations.” DensPose is part of Facebook’s investigation into computer vision. →
→ Garland, Alex. 2015. Ex Machina. United States: Universal Pictures.
Luigi Galvani (b. 1737 – 1798) was an Italian physician, physicist, biologist and philosopher, is recognized as the pioneer of bioelectromagnetics. See here one of his experiments on the sciatic nerve of frogs; and the first detection of what is now known as ‘galvanic currents.’ →
Jim Al-Khalili, What's Next? Even Scientists Can’t Predict the Future – Or Can They? 2017. Pub: Profile Books. • Recommended by Pinar Demirdag from design duo Pinar & Viola.
John Brockman, What to Think About Machines That Think: Today's Leading Thinkers on the Age of Machine Intelligence, 2015. Pub: Harper Perennial. • Recommended by Pinar Demirdag from design duo Pinar & Viola.

Dutch bank ING, in partnership with Microsoft, has created an AI which generates replications of Rembrandt’s famous paintings. ING, Microsoft. 2017. Next Rembrandt. The Netherlands.

Genmo (short for Generative Mosaic) is an AI-powered app that recreates any photo or video using an entirely separate set of images. → Salavon, Jason. 2017. Genmo. University of Chicago: Latent Culture.

Tay was an artificial intelligence chatterbot that was originally released by Microsoft Corporation via Twitter on March 23, 2016; it caused subsequent controversy when the bot began to post inflammatory and offensive tweets through its Twitter account, forcing Microsoft to shut down the service only 16 hours after its launch.

Deepfake is an artificial intelligence-based human image synthesis technique. It is used to combine and superimpose existing images and videos onto source images or videos. For example, deepfake pornographic films have been made of Gal Gadot having sex with her stepbrother in 2017, and other celebrities such as Emma Watson, Katy Perry, Taylor Swift, or Scarlett Johansson.

Happenings
A collection of some of the visual references, in no particular order, which supported the development of the open call for Issue 03. Uncanny, launched on Fictional Journal’s website on the 26 July, 2018. Exhibited in the installation A Body of Trust curated by Mark Henning at School of Schools 4th Istanbul Design Biennale, curated by Jan Boelen, Vera Sacchetti and Nadine Botha.
Issue 03. Uncanny, made in collaboration with Baltan Laboratories, will be launched during the Frankenstein Symposium. Fictional Journal will present the process behind the issue, and how design responses reflect on the relationship between creator and creation.
Fictional Journal will present Issue 03. Uncanny during the Frankenstein Exhibition at Baltan Laboratories, during Dutch Design Week 2018, in Eindhoven, Netherlands. The journal will screen three films: Everyday Facial Yoga by Legrand Jäger, 파라솔 Beach Umbrella by Sjoerd ter Borg and Mark Jan van Tellingen and Tuda Syuda by Paul van Herk, Liudmila Savelieva, Thomas Grogan and Ivan Puzyrev. Issue 03. Uncanny will be on display alongside the research publication produced in the leadup to the open call.