Millennial. Where am I?

M. No, I think I’ve never been here before.

MROI. You just crossed the borders of The Millennial Republic of Imagination.

MROI. It is everywhere and nowhere. It depends on you.

M. How could a place with borders be everywhere and nowhere?

MROI. You set the borders of the republic when you step in and out.

MROI. It does. Trust me. When you decide to step in, you set the border for possibilities. When you step out, it is impossible for you to be here. But, you can also choose to walk on the line in-between. That is for the best view.

MROI. Some years ago, you lost your voice and your time. You opened and closed your mouth like a puppet in the hands of a ventriloquist but the words coming out were not your own. Yesterday, you began to name yourself and the others. That is when the clock started running and that is when you ended up here.

M. There is no need for clocks in where I come from. We are stuck in the present and in the hope for the past.

MROI. Then how do you know when is tomorrow?

M. You are hilarious. The future doesn’t exist!

MROI. What do you mean? That you don’t believe in the future?

M. It is not a matter of belief. There is just nothing to talk about. Everybody knows that – the newspapers, TV, music, schools, even my parents.

MROI. This is the first time I hear anything like that. Here the future runs at the rate of sixty minute an hour 1.

M. Then you must be scared all the time.

MROI. Scared of what?

M. I suppose you have never owned a dictionary?

1 Singular word referring to something that cannot be anymore;

MROI. Our languages are different. Here we care about the future. We will have to spend all our lives in there! 2

1 Singular word referring to a place for hopes and dreams;

1.2 A place where affirmation resides.

M. My brain hurts. We don’t use affirmations in where I come from. We define things for what they are not; dis-illusion, a-pathetic, in-different, list-less, un-accountable, dis-oriented, un-happy, dis- satisfied. Do you now understand why my brain suffers?

MROI. I understand. But, here you can decide how to name yourself; re-create, re-present, re-construct, re-appropriate, re-invent, re-claim, re-store, re-orient. Here you can imagine what you will be. Will you come back? Will you remember how to come here?

M. Are you sure I should? 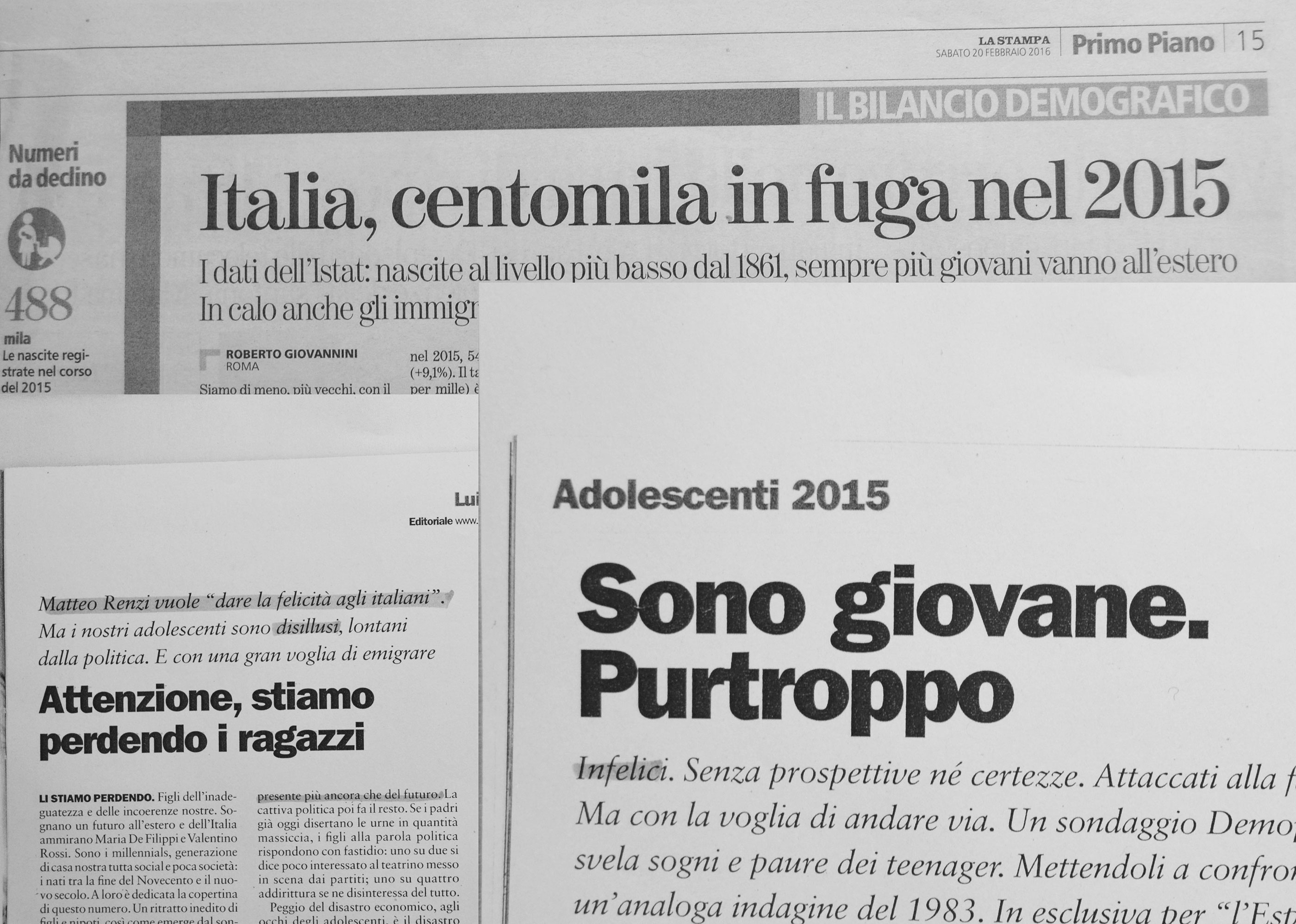 In the recent years, the Italian media has coined many definitions that refer to young people in Italy 3. In newspapers, television and books, young people are defined as the ‘Sad Youth’ 4 ‘Sons of Disenchantment’ 5 because their supposed sad feelings, or ‘Italians’6 or ‘Post-Italians’ – which is different from ‘Italiani,’ who live or have a future in Italy – because they aim to leave or have already left the Italian borders. They are called the ‘Bataclan Generation’ because of the negative historical events they are involved in, or ‘NEET – Not in Education, Employment, or Training’ due to their economical situation. They are even dubbed ‘Sdraiati – The People Lying’ 7 according to the position they are supposed to be the most comfortable in.

Positive descriptions of young people are very unlikely to be found on the Italian media. It constantly spreads an image of the future as a fatality we will have to face, and the youth as an unfortunate stage in life. In the media, life is an upside-down timeline, which makes the past and the old age much more desirable than the future and the youth. Surrounded by negative images of themselves, many young people in Italy feel like being under a blanket of impossibility knitted for them by the public discourse. The negative image that they have internalized and accepted as the only truth seems to disable them from envisioning a future for their present. Consequently, they define themselves for what they are told they are not rather than for what they would like to be: dis-illusioned, a-pathetic, in-different, list-less, un-accountable, dis-oriented, un-happy, dis-satisfied. There is a generalized alpha privative on all the adjectives to describe oneself in a generation that seems to have finally substituted rebellion with tradition.

Italo Calvino was asking himself in ‘American Lectures’ in the late 1980s if there was to be a place for imagination in a society full of images. What I am asking myself today is what the future will be with no imagination but with plenty of negative images. Imagination is the human faculty to create, process and distort images. It is a creative power that, in psychological terms, is defined as a particular form of thinking that does not necessarily follow the logical and fixed rules of reality. Imagination is triggered by sensory experiences coming from the present or recovered from personal and social memory data. It is stimulated by emotions or evolved around a specific theme. It consciously and subconsciously allows reinterpretation and reworking of what we know, and presents itself as a radical human ability to envision something different, and to construct options.

As philosopher Cornelius Castoriadis stressed in his radical view on imagination, without imagination there could not be any reality. Even when a reality is defined, imagination remains always functional to question its objects and to disclose possible alternatives.

In times of real or envisioned crisis, imagination becomes a powerful tool for criticism and action. When used as a form of escapism on a journey to a happy ‘never-never land’ or as a tool for speculating solutions to existing problems, sharp imaginative knowledge allows people to provide divergent answers to the frightening and uncertain situations they are confronted with. Travelling in our own imagination allows us to come back to reality and look at it from unusual perspectives, and to conceive our lives not just for what they are, but what they can be. The more we are able to use our imagination in the moments of crisis in which sudden discontinuity forces us to re-adapt, the more we will be able to envision a joyful future to our present. As beautifully expressed by Azar Nafisi in her book The Republic of Imagination, “the works of imagination are the songbirds in the coal mine: the unit of measure to evaluate the health state of a society.”

If what Nafisi states is true, an imaginative disability can be a symptom of a sick society that, because of its illness, has troubles in reacting to the challenges it is confronted with. Therefore, it becomes unable to envision a future for its present.

Viruses alone are not enough to make a society sick though. They also need powerful catalysts to be spread around. The negative images of the Italian youth that are constantly spread by the Italian media become the catalysts for the imagination disability that has infected the young Italians’ imaginative knowledge. If the young Italians want to envision a future for their present, they will first need to reclaim the image that the media spreads about them, and re-appropriate it through their imagination.

Anthony Dunne and Fiona Raby write in their book Speculative Everything that “speculative design can be a catalyst for this: it can inspire imagination and a feeling that, if not exactly anything, more is definitely possible.” In the process of the young Italians regaining their imagination, designers as image creators and imagination specialists can encourage action by cooperating in speculating on a new image for the generation of the Italian Millennials.

Designers belonging to the same generation are on the verge of being involved in the situation. Yet with education and experience to use their imagination, they just might have the best view on the border of the Millennial Republic of Imagination; a view that positions them between what seems impossible, and between the new possibilities.__

4 Elisa Lello’s 2015 book La triste gioventù. Ritratto politico di una generazione is socio-political reflection on the generation of the Italian Millennials, who are portrayed as a suspended generation with no clear idea of the value of the future. The book describes the radical change that the concept of Future has undergone for young Italian people through interviews. Future has passed from being the place where hopes and dreams reside to being described as risk, threat and decline.  ←

5 Book ‘I figli del disincanto. Giovani e partecipazione politica in Europa’ (2007) presents a study on ‘The Sons of Disenchantment,’ people born after 1980 in Europe. They are sons of a generation that has seen the end of passions and ideals. More concrete and disillusioned, their political view is more neutral than in the previous generations.  ←

7 ‘Gli sdraiati’ is a book by journalist and writer Michele Serra. The satiric tale describes today’s Italian teenagers from the tender and powerless perspective of a father. The analysis of the young generation becomes also an introspective analysis of the generation of fathers. “I call them Sdraiati (the people lying), because of a statistical matter. Most of the time I happened to see them lying, rarely on the bed more frequently on the couch,” Serra said in the book launch at Feltrinelli in 2013. ←

Teresa Palmieri is an Italian designer with no fixed location. She is particularly interested in design as a social research tool. Her multidisciplinary curiosity makes her works vary from product to graphic design, and to scenarios in which design is used in its cultural, political and narrative potential to investigate contemporary issues. She holds a Master of Design in Social Design at Design Academy Eindhoven.